I have come to stay 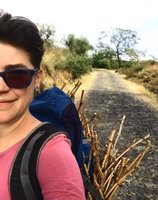 SORRY - WHAT AND WHERE?
What did you say? Where? This is how I reacted three years ago, when I received a job offer as an oenologist (aka winemaker) in my e-mail inbox. I had to search on my globe for a while until I have found them. Really? Viticulture over there – very exciting – I must see it!

Indeed it is really exciting. On the island of Fogo I have discovered grapevines that are more than a hundred years old, surely there also younger ones as the cultivation is frequently destroyed by the lava ash of the returning volcano eruptions. The active volcano – “comandante”as the local people call him lovingly – has both destroying and creative forces at the same time as the soil is without any doubt super fertile and adds the grapes particular mineral aromas.

Limiting factor for the viticulture – as everywhere on the world – is the lack of water. So why do we grow vine on Fogo?

FROM WINE TO EINSTEIN
If we look back into history, we can find out that the Portuguese introduced the viticulture already in the 16th century on the archipelago – mainly on the islands of Santo Antão, São Nicolau, Santiago and Brava. The production has been successful and even been excessive thus they started to export the wine to South America, mainly Brazil, in the 17th century. However, the Portuguese with its colonial power did not like that at all and consequently the ruling Marquês de Pombal ordered to destroy all vineyards on the island.

Well, one little village did not follow the order – guess where – at the foot of the “comandante”...

In 1860 the Frenchman Armand Montrond arrived in Cape Verde and settled on Fogo Island. Besides the fact that he might have been a fugitive he had started to grow grapevines all over the island and had many, many children. Nowadays vine and the name Montrond are connected very tightly like Einstein and his theory of relativity.

LET'S GO BACK TO THE ROOTS!
Until today, Fogo remains the only island where wine is produced. In the beginning of the 20th century vine production increased in the crater of the volcano – at Chã das Caldeiras; however the recent eruptions of 1995 and 2014 destroyed a vast amount of it...luckily not everything – people always continue! In 2005 viticulture took place on around 200 hectares, today we are back to 500 – tendency increasing! At 1.700 meter above sea level the temperature favors the cultivation as well as the difference in temperature between day and night flatters the grapes.

Next to the two main cooperatives “Chã” and “Sodade”, Padre Ottavio – an Italian capuchin monk originally from Piemont started the new project “Vinha Maria Chaves” in 2003. It is located just at the doors of São Filipe.

Viticulture on Cape Verde!
Let`s go back to the roots!

Originally, the grapes are from Portugal, but most of them have not been analyzed nor categorized.  As the vine fretter is non-existent on Cape Verde, the grapes can be grown and multiplied via timber...and Mother Nature surely knows how to adapt their children to the natural environment.

NEXT GENERATION
Without any doubt the Portuguese started to grow vine on the island of Santo Antão as here you can find valleys that have water all-year-round. Today, again, many grapevines have been planted on terraces in Chã de Igreja. Their origin is 100% from Fogo, partly from Chã das Caldeiras partly from Serra – my little "kindergarten".

On Fogo white, rosé and red wines are produced, sometimes as well some “sweet wine” being called Passito and not to forget the local “Manecom”. The latter is a wine á la back to basic. Being produced by hand and without any further technology, only with the use of inherited knowledge! 100% unique.

The children on Santo Antão already anchored their roots in the ground...it remains very exciting whether they will carry their first grapes still this year .

To be confirmed!
I came – discovered and stayed!
Christine 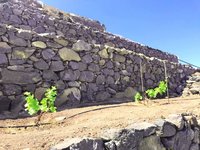 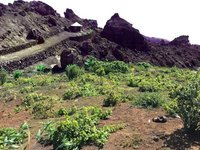 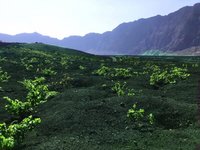